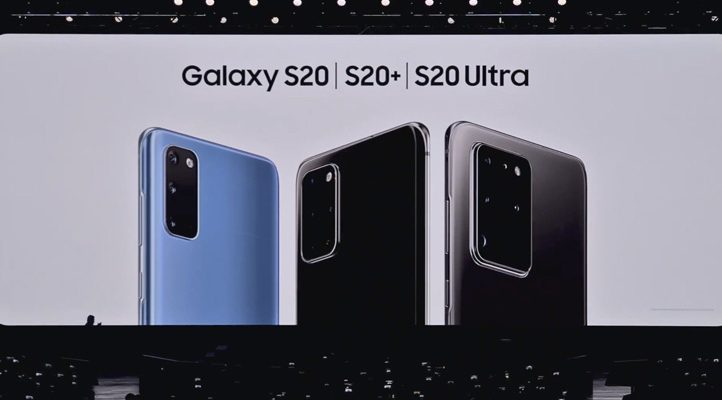 During the Unpacked 2020 event, which is a news conference held yesterday in San Francisco, Samsung unveiled many new smartphones. The devices announced included the Galaxy S20, Galaxy S20+ as well as Galaxy S20 Ultra. For the smaller phone (the first one), pricing will start at $999, and all 3 devices will be available for sale on March 6.

The handsets have support for new 5G network in the United States. Also, two of them have become the first in the country to support both the slower and faster variants of 5G, which a number of carriers are releasing.

With this development, Samsung has about a 7-month lead over Apple when it comes to 5G, and that is assuming the latter company launches its upcoming 5G iPhones in September, as anticipated.

The trio of Galaxy S20 devices also offers many of the regular features we look forward to in Samsung smartphones, which are stunning screens and tons of exciting camera tricks.

There is a pretty awesome feature known as Single Take, which is in all three models. To use it, you simply tap a single button inside the cam, and it will start shooting photos for 10 seconds. And after that, the software of the cam will automatically choose many neat-looking pictures & videos that have various effects, such as a black & white filter or portrait mode on a blurred background behind the subject.

This option is ideal in a situation when you do not know whether to shoot a video or a picture, as it simply does it all for you.

Let’s look at the features, price, and availability of the 3 announced S20 smartphones.

This handset has a 6.2” screen and is the smallest of the trio unveiled Tuesday by Samsung. The phone, which will cost $999, is featuring virtually all of the bulk of the high-end specs you would expect in a smartphone.

Some of those are, a sharp and vivid screen; the latest & fastest Qualcomm processor; a cam, which zooms up to 30 times allowing you to snap photos from a very far distance; a wide-angle cam that helps you fit more into pictures; a feature for recording videos at 8K resolution, among others.

It provides almost all of the features in the larger and more expensive Galaxy S20+ except one function.

The S20, unlike the S20+ and the S20 Ultra, only has support for the slower type of 5G as of yet, which is rolled out across the US by T-Mobile and deployed by AT&T. The phone will not have support for millimeter wave (also called mmWave), which is the 5G version with the fastest possible speeds.

Starting at $1,199.99, the Galaxy S20+ is quite big sporting a 6.7” screen. It has support for the 2 types of 5G networks, which network carriers are releasing. So, you will enjoy blistering mmWave speeds when you are within the vicinity of a tower.

However, you will otherwise receive the slightly faster-than-4G speeds when that is also available as well, with the exception of Verizon that is not rolling out the slower version of 5G.

Other than the bigger screen and the better 5G support, it has many similarities with the Galaxy S20. They both have identical cameras and, just like the S20, there is an in-screen fingerprint reader, a sharp and vivid screen that has a new 120 Hz refresh rate.

With this refresh rate, you will find tasks such as scrolling through tons of pictures & websites much smoother, and there will also be a lot of memory to run many apps all at once.

The Galaxy S20 Ultra is the much bigger and more expensive device in the S20 line. It is designed for buyers that desire everything Samsung can pack into a smartphone.

The handset sports a massive 6.9” screen, which looks dashing but is slightly hard to hold. It features an incredibly powerful 108MP cam, which can zoom up to 100 times owing to the fancy blend of hardware & software tricks by the maker.

The shooter lies beside a new time-of-flight (ToF) sensor, which is used for augmented reality (AR), 3D image scanning, and other things. Also, the S20 Ultra packs a huge battery and has support for both the slower and faster 5G networks that are released in the United States.

Though the device may feel slightly heavy and big to certain users, it seems like a product big fans of Samsung will love, particularly since it offers features that are not in the iPhone, such as 5G and the smooth 120 Hz display. However, they will have to shell out the most expensive amount yet for a Samsung high-end smartphone as the S20 Ultra will start at $1,399.99.

Availability All 3 mobile devices are billed to be released for order starting February 21, and they will get to stores March 6.