Skip to content
You are at:Home»Reviews»Game of Thrones, Season 6 Episode 7: The Hound Returns as ‘The Broken Man’ 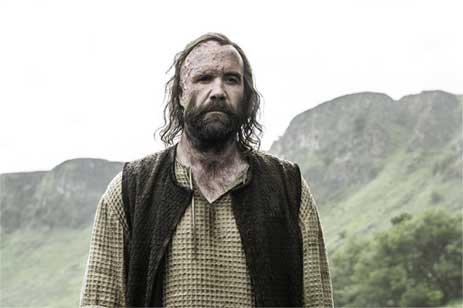 Like Jon Snow, we all thought The Hound was dead and buried but he made a return to the show, not like rising from the dead like darling Lord Jon but actually making it back to life when it seemed impossible. Last time we saw the Hound was in the 5th season and he was badly wounded his bones gushed out from his skin after fighting with Lady Brienne of Thart, only the gods could save him. And so was it, the Hound survived.

In the middle of nowhere in Westeros, The Hound resurfaced chopping wood with an axe like his life depended on it under the guidance of a new septon called Ray who was working with his people to build a sept. Ray told The Hound how the gods or whatever forces gave him another chance at life because he was preparing his funeral rights when he coughed. Three horse riders attacked killing everyone but Sandor Clegane, aka ‘The Hound’ who wasn’t there.

Meanwhile, Jon, Sansa and Ser Davos continued their quest to gather manpower to rescue the North back from Ramsay. At the Bear Island, ruled by the Mormonts they met a new ruler, a badass little girl. Every attempt by Jon Snow and Sansa to talk her into committing armies to join them in fighting Ramsay fell on deaf hears, not until Ser Davos spoke and she agreed to release 62 men to them. Sansa wasn’t satisfied yet with the numbers they have so she wrote a letter presumably to Littlefinger, asking him for more men to join the cause.

Back in faraway Braavos, Arya still has a lot to learn. After disobeying the waif last week we thought she had a grand master plan to escape. Well, she did not until the lady waif tricked her with the faceless trick turning into an old woman then stabbing her 3 times in the belly. She survived after being pushed into a carnal but we wait to see what happens to her next.

Jamie Lannister took Cersei’s advice to fight for Walder Frey in taking Riverrun back after Catelyn’s uncle, the Blackfish had taken back their rightful home back. The old warlord enjoyed himself watching the useless yet amusing Frey sons threaten to cut Catelyn’s brother throat, Edmure who was taken hostage at the Red Wedding massacre. He called their bluff to go ahead but they couldn’t do nothing. Jamie Lannister got there with his own army telling the Blackfish to surrender so as to avoid war. The Blackfish would rather die fighting than surrendering the House of the Tullys to the Freys.

This episode was a good breakaway from Danny and her dragons, we wait to see how things play out in the next episode.