Skip to content
You are at:Home»News»Twitter Testing New Ways to Give You More Control Over Your Conversations 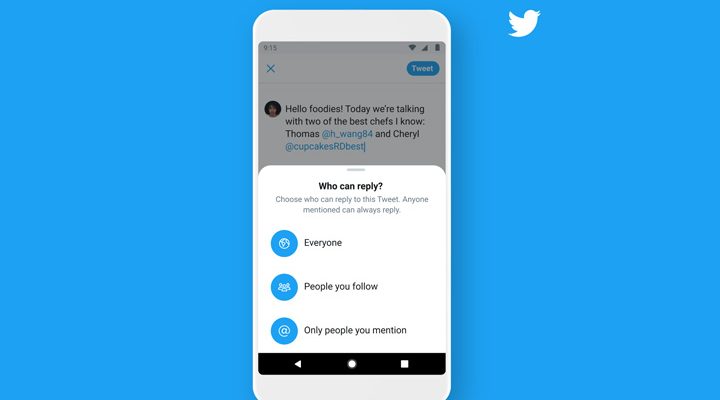 Twitter is giving you more control over who can reply to your tweets and join your conversation. Twitter says it is testing the new conversation settings and the feature will be available to only a few number of users on the web, its Android and iOS app.

Normally, whenever a tweet is made, anyone on Twitter can join the conversation and reply but the new conversation settings will give users more options and control. From now, before a tweet goes out, users will be able to choose from three options:

Tweet owners with either the last two options will be labelled on the timeline so everyone can see, the Reply icon will be greyed out for people not mentioned the in the conversation or people you do not follow based on your preferences. People who can’t reply or join the conversation can still perform basic features such as like, retweet or retweet with a comment.

New users/accounts can be added to an ongoing conversation provided a maximum number of 50 people are not there yet. To add people to your conversation, reply to the original tweet and swipe down to close the editing screen, type the usernames you want to add and tweet.  Every username typed counts as part of the 280-character limit.

People can also be removed from a conversation from the editing screen. Every added username has a checkmark icon in front, a tap on the icon deselects participants and the icon becomes unchecked.

Twitter will also let you see accounts you have blocked so you do not make the mistake of adding them as part of a conversation.