Skip to content
You are at:Home»Reviews»Lithium-Ion VS Lithium Polymer Battery: Which Is Better? 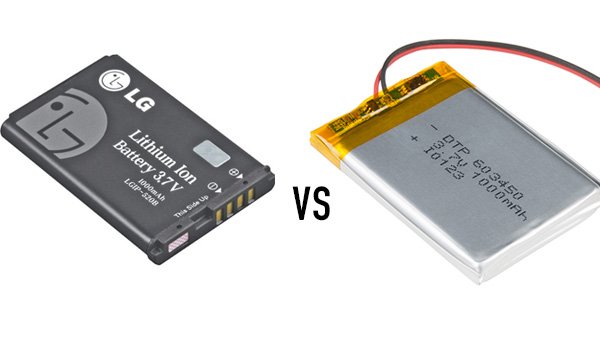 If you open the back cover your phone, chances are that you will see inscriptions, such as “4500mAh Li-ion,” “4000mAH Li-Poly,” and the likes, emblazoned on the battery. What is a Lithium Ion battery? What is a Lithium Polymer battery? Comparing lithium-ion vs lithium polymer, what the differences? Which of them is better? Today’s article sheds light on these questions. And others.

A LiPos battery, also called Lithium-ion-polymer battery, operates on the principle of lithium ions intercalation and de-intercalation from a positively charged electrode material as well as a negatively-charged one, and the liquid electrolyte provides a conductive medium. A microporous separator lies in between, allowing the migration from one side to the other of only the ions, and not the particles of the electrode. This prevents the electrodes from making direct contact with each other.

The dry polymer design provides simplifications as regards ruggedness, fabrication, thin-profile geometry, and safety. With a cell thickness that measures as little as 1mm (or 0.039 inches), designers of equipment are left to their own imagination concerning shape, size, and form. Lithium-ion-polymer has its market niche in wafer-thin geometries, like batteries used in credit cards, coupled with other similar applications.

The Lithium-ion cells offer a nominal voltage that is pegged at 3.7 volts. If you take a look at your laptop battery, you will see that it offers 11.1V, which is equivalent to 3.7V x 3. Therefore, your laptop battery can be described as a 3-cell battery. While the number of cells in other laptop batteries is different from this, they all operate in the same manner. Though lithium-ion is slightly lower in energy density compared with lithium metal, the ion is safe once certain precautions are taken when it is charged and discharged.

The Sony Corporation achieved the commercialization of the first lithium-ion battery in 1991, and other manufacturers also towed that path.  This high cell voltage, 3.6V, helps battery in packing designs that have just a single cell. The majority of today’s smartphones run on a single cell.

How Is Lithium Ion Different from Lithium Polymer Battery?

In modern digital devices, the differences between the two might be quite small; however, it is better to consider power in Watts, not Amps. Is a Li-Ion 4200-mAh battery of the same capacity as a Li-Polymer 4200-mAh battery?  Various types of battery have various voltages. A standard AA cell produces 1.5V; however, a rechargeable AA normally produces just 1.2V or 1.3V. For this reason, some equipment does not work well when they’re powered by rechargeable AA batteries.

Li-Ion and Li-Poly with an equal amount of mAh have equal power storage capacity. This implies that 2000mAh for the 2 batteries are the same, and the voltages are equal, 3.7V for one cell. The difference between the 2 types lies in the fact that Li-Poly offers a bit higher value of energy density, and the materials used in designing it allow it to have a different shape than Li-Poly.

The major difference between the 2 types of batteries is the chemical electrolyte that is used between their positive electrode and the negative one. In Li-Po batteries, the electrolyte is not a liquid. In place of a liquid electrolyte, Li-Po technology makes use of 1 of 3 types, which is a dry solid, largely phased out in the prototype period of lithium polymer batteries; a gel-like electrolyte; or a porous chemical compound.

The gel-like form is the most popular one among the 3 and is the type of battery that is in newer laptop computers as well as electric cars. The catch here is, a lot of manufacturers aren’t really offering a true Li-Po battery; in place of this, what you get is a lithium-ion polymer battery or a Li-ion that is inserted in a more flexible casing.

So, having compared Lithium-Ion VS Lithium Polymer, which is really better? Answering this question is quite difficult. Considering the differences between Lithium-Ion and Lithium-Polymer batteries, they provide the same service. But one is more expensive to produce. Also, Lithium-ion batteries have to be carefully charged, or they will explode and do other funny things. For this reason, all Li-ion batteries come with either integrated charge-regulating electronics or specific fancy chargers.

As for Li-polymer batteries, they are unique in the sense that a micro-porous electrolyte is used in them instead of the traditional porous separator. These batteries provide slightly higher specific energy. They can also be made thinner than the traditional Li-ion type. However, the manufacturing cost is more than that of Li-ion by 10% – 30%.