Skip to content
You are at:Home»Mobile»Samsung Galaxy A50 Price in Nigeria and Specs 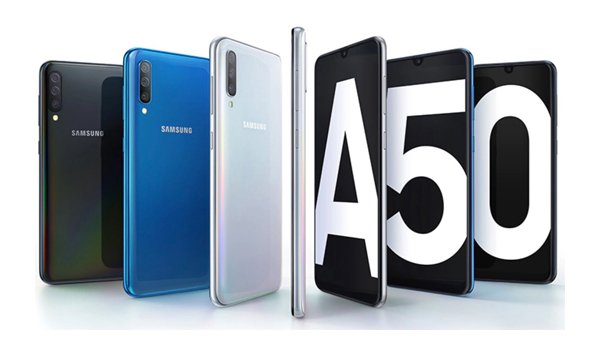 The Galaxy A50 was one of the new smartphones unveiled by Samsung at Mobile World Mobile Congress (MWC), which was held in Barcelona, Spain, late February. The device was launched alongside Samsung Galaxy A10, A30, and other nifty products. It is coming with a number of decent features, such as a 6.4-inch display, an in-display fingerprint sensor, a triple rear camera setup (25MP + 8MP + 5MP), and a 25MP front-facing shooter for taking selfies.

Here are some specs of the new smartphone:

Samsung Galaxy A50 Display and Design

The A50 sports a large 6.4” 1080p+ AMOLED display that offers a screen resolution of 1080 by 2340 pixels, a 403ppi as well as a notch cut out, which is at the top for the phone camera. Underneath this display is a fingerprint sensor, and at the back of the handset is the triple camera — the only feature at the rear. The device is water- and dust-proof since it is IP68-certified.

The phone display is covered with glass, but its body is designed with plastic, reflecting the White, Black, Coral, and Blue color options elegantly. There is a variant that has a single SIM and another one with a Dual SIM. Both models offer a dedicated MicroSD card slot.

Samsung Galaxy A50 Camera and Battery

The handset comes with 4 cameras in total: 3 are at the back and 1 at the front in the notch. The first rear camera has a 25MP sensor with an f/1.7 aperture & PDAF; the second one is an ultrawide camera, of 8MP, offering an f/2.2, and the last one is a 5MP depth sensor camera that equally features an f/2.2 aperture. The setup has LED flash and other features such as Panorama and HDR. They can also do 4k and 1080p video recording at 30fps. Up front, there’s a single 25MP selfie snapper with an f/2.0 aperture. It features HDR and can shoot 1080p videos at 30fps.

The Galaxy A50 is equipped with a 4,000mAh battery that has 15W fast battery charging. But it does not offer wireless charging.

Samsung Galaxy A50 Hardware and Software

Samsung’s own Exynos 9610 Octa SoC drives the A50. This SoC is an octa-core processor that is clocked at 2.3GHz and works in conjunction with a Mali-G72 MP3 GPU. The configuration is paired with either 4GB of RAM and 32GB of built-in or 6GB of RAM and 128GB. It provides a designated MicroSD card slot to expand the storage up to 512GB if you need additional storage capacity.

As regards software, the phone ships with the latest Android OS, Android 9 (Pie), straight out of the box, coupled with Samsung’s latest One UI.

Samsung Galaxy A50 Network and Connectivity