Skip to content
You are at:Home»Mobile»Google Integrates Android Pay with More Banks Around the World: Here is all You Need to Know 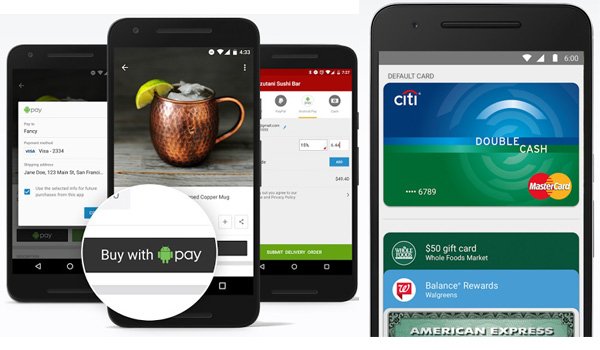 Android Pay review, Android Pay Security, Android Pay compatible phones, Android Pay countries – All you need to know about Android Pay. Google recently announced in a blog post it is expanding the reach of its Android Pay app and extending its functionality to more banks around the world. Customers of banks like mBank, USAA, Discover, Bank of New Zealand and Bank of America can now add cards to Android Pay from their mobile banking apps and start making payments in stores worldwide.

Android Pay Review – All You Need to Know

What is Android Pay?

Android Pay is a payment app that allows you store your debit or credit cards on your android device in order to make payments worldwide in stores that support NFC payments. To use Android Pay, your phone must come with an NFC sensor and must be running on Android 4.4 Kitkat OS upwards.

How to Install and Set-up Android Pay

Like we said earlier, many banks already support Android Pay worldwide. In the UK, banks supporting Android Pay includes – Bank of Scotland, Nationwide, HSBC, Santander and Halifax to name a few. Google’s latest update makes it now possible to still use Android Pay even without having the app itself. For some selected banking apps that supports NFC payments, you can integrate your debit cards to still access Android Pay.

DON’T MISS: How to send and receive money through Gmail

Android Pay is completely safe to use because your card details are not directly stored on your phone. When paying in stores, Google creates a connection with the card reader and a secure virtual terminal where payment information is stored. After every successful transaction, Android Pay sends you notifications immediately. Many stores in the UK and America now accepts Android Pay.