Skip to content
You are at:Home»Mobile»Samsung Galaxy Z Fold 3 Announced with Under-display Camera and IPX8 Rating for $1,799 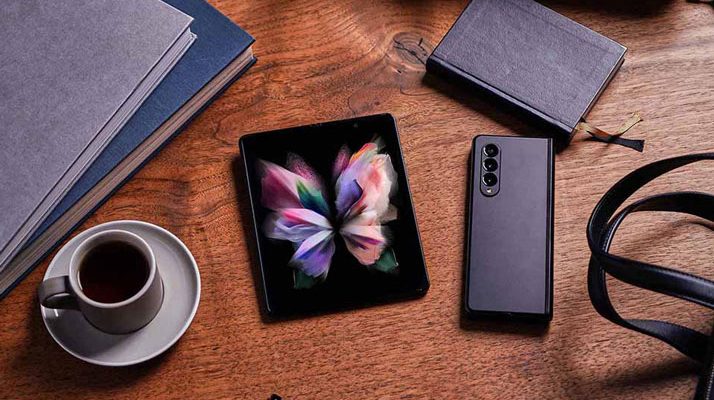 Samsung on Tuesday unveiled the Galaxy Z Fold 3, the third generation of its foldable flagship at its Unpacked Event. The new foldable phone brings enhancement in terms of durability and performance, it also comes with an IPX8 rating for water resistance and support for S Pen.

The new Galaxy Z Fold 3 maintains the same 7.6” Dynamic AMOLED 2X and adaptive 120Hz refresh rate as the Galaxy Z Fold 2. There is a new feature however, the new foldable flagship is now the first Samsung phone to feature an under-display selfie camera. The under-display camera has a 4MP resolution with 2.0µm pixels and f/1.8 aperture. There is another selfie camera in the punch hole on the cover screen with a 10MP resolution and f/2.2 aperture.

The cover screen maintains the same 6.2” diagonal screen as its predecessor with a Gorilla Glass Victus protection but it now has a 120Hz refresh rate. For the rear camera, there is a triple camera setup featuring a 12MP main camera with f/1.8 lens and 1/1.76″ sensor size (1.8µm pixels), 12MP f/2.2 ultrawide unit with 1.12µm pixels and another 12MP f/2.4 telephoto snapper with 1.0µm pixels and 2x zoom. The main shooter has Dual Pixel Autofocus and Optical Image Stabilization (OIS), the telephoto lens has OIS as well.

The Galaxy Z Fold 3 is sturdier now with an Armor Aluminum frame while the entire back has a Gorilla Glass Victus protection. The phone has a 4,400mAh battery capacity which is down from the 4,500mAh of the Galaxy Z Fold 2. It comes with a 25W fast-charger with the power brick and tops at 11W with wireless and at 4.5W reverse wireless charging.

Samsung finally brings S Pen support to the Galaxy Z Fold 3, with users having the option of getting the S Pen Pro or the new S Pen Fold Edition – a special accessory designed exclusively for the Z Fold 3. The S Pen Fold is slightly smaller than the S Pen Pro, it supports Air commands but has no Bluetooth connection.

The Galaxy Z Fold 3 has 256GB and 512GB storage versions with the starting price at €1,799 or £1,599 in Europe. It is available in Phantom Black, Phantom Green, and Phantom Silver colour options. Pre-orders are underway already and the phone will start shipping from August 27.