Skip to content
You are at:Home»News»Samsung Galaxy Note 10 and Note 10+ Launched by Samsung with S-Pen and AMOLED Display 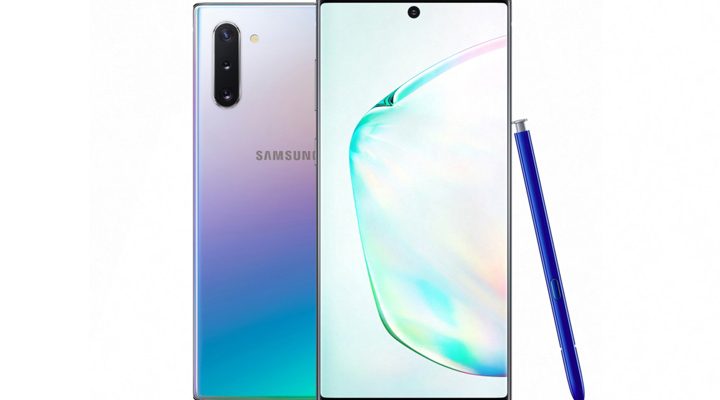 Its finally here, the Samsung Galaxy Note 10 and Note+ were unveiled yesterday by Samsung at its Unpacked event, the first time its Note flagship will be coming with a Plus version and with no headphone jack. For the first time, there is also a third version which is the 5G variant of the Galaxy Note 10+.

As expected, the US and China models of the Samsung Galaxy Note 10 ships with a Snapdragon 855 chipset with an 8GB of RAM while the Note 10+ and the 5G-enabled Note 10+ comes with 12GB RAM. The newly announced Exynos 9825 SoC will power the versions for other global markets with the same RAM specifications retained. In terms of storage, both devices 256GB. Internal storage space but there is a Note 10+ model with a 512GB ROM. The Galaxy Note 10+ will be expandable to 1TB via the external SD card slot but the normal Note 10 does not come with a micro SD card slot.

The camera features are almost similar, all the models come with a 10MP selfie camera on the Infinity-O display and a triple rear camera setup 16MP ultra-wide-angle lens, 12MP wide-angle lens and a 12MP telephoto lens. The. Note 10+ and the 5G version, however, stands out with the rear camera adding an f/1.4 Depth Vision for clearer portrait shots.

In terms of battery size, the Samsung Galaxy Note 10+ has a bigger battery with emphasizing the 4,300mAh battery lasts ‘all-day’. The Note 10 comes with a 3,500mAh battery size. Samsung also updated its DeX accessory which allows users plug the new Not 10 devices to PC or MacBook giving a desktop-like experience. The S-Pen remains of course but it has been made better with updated gestures and native support for handwriting-text conversion.