Skip to content
You are at:Home»Reviews»Game of Thrones, Season 6 Episode 4: Daenarys is Still the Usurper 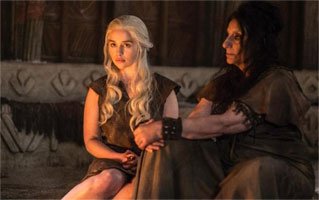 The opening scene was not what everyone expected when Sansa, Lady Brienne of Thart and her squire boy rode into the courtyard at Castle Black, we all thought Ramsay wouldn’t give up chasing them yet. The reunion between Jon and Sansa was a thing of joy after so many years apart. A lot has really happened to the Starks: Arya watched her Dad, Ned beheaded by Joffrey, their mother Catelyn and Rob are dead. Arya and Bran are places far away.

Sansa manages to convince Jon Snow they need to take the North back from Ramsay after many persuasion, Jon Snow having been fighting since he pledged his oath of service to the Night’s Watch was reluctant at first. It will be intriguing to see how the Starks win their home back.

Littlefinger made a much awaited return back at the Vale. He was able to use his cunning and charming manipulation skills to convince the young lord, Robin, who normally suck his mother’s breast to join forces with the Starks in atoning for his sins, having seen how Sansa suffered at the hands of the Boltons.

Back in Meereen where Tyrion is in charge and entrusted with returning order to the city, he meets with the masters at Astapor and Yunkai offering them terms so they could stop supporting the Sons of the Harpy. The terms do not go well with Grey Worm and Missandei as it involves giving them a seven-year transition period to abolish slavery. Seven years is a lot of time to enslave people.

At Westeros, the power of the High Sparrow grows stronger every day and something must be done to stop him before Margaery, the queen does her own walk of atonement. This leads to the house of Tyrells and the Lannisters becoming an unlikely allies due to common interests.

Finally, Daenarys got the last laugh as she emerged unscathed trapping and burning her Dothraki captors in a scene which surprised us all. Everyone knew she would escape someway but not in explosive fashion like that.

Things are heating up gradually and I am looking forward to more actions in the next episode.