Skip to content
You are at:Home»Reviews»Game of Thrones Season 6 Episode 2 review: “What is Dead May Never Die.” 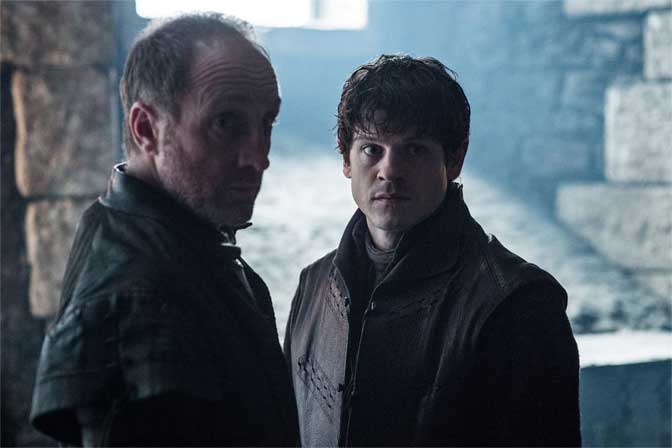 As the Iron-born saying goes, What is Dead May Never Die. This was the case when the Lord Commander of the Night Watch, Jon Snow was resurrected back to life by the Red Woman (For once the Lord of Light showed her the way and she was useful this time}. We all hoped Jon Snow would be brought back to life one way or the other as long as his funeral rights have not been performed, but episode 1 cast doubts in our hearts but I still clung on to the little hope that our darling Lord Commander will be back. Thank goodness, Lord Snow is back, this is the biggest news so far since Season 6 premiered.

Away from Castle Black, Brandon Stark made a return after a year absence from the show. The psychic Stark boy along with the Three-Eyed-Raven traveled back in time in their vision to Winterfell witnessing his father, Ned and his uncle, Benjen training as kids in the courtyard. A young Hodor too was in the vision and he could actually say other words apart from his name….who knew?

The-Three-Eyed raven shuts the vision and brings Bran back to reality to his dismay warning Bran he could get drowned in the vision. Could Bran hold the key to knowing Jon Snow’s mother and identity since he could travel back in time?…We hope so.

Back in the Free City of Braavos where Arya is still being tortured and learning how to be a No One, Jaqen H’ghar tempted her to say her name to get her eye back and stop begging but she passed the faceless god’s test. Arya is done begging and might be getting her eye back.

In faraway Meeren, Tyrion, Varys alongside Grey Worm and Missandei are getting used to being in charge. The fate of the Mother of Dragons, Daenerys still remains unknown until the next episode. Tyrion suggested the Dragons could be useful and that they should be released from the dungeon since they’ve refused to eat. Varys followed Tyrion to the den but he stopped at the entrance not wanting the dragons to eat what was left of his genitals. Hehehe. Tyrion as brave and witty as he is was able to remove the chains from the dragons’ neck, and earned their respect, at least for now, LOL.

Back in the North, Ramsay Snow reaffirmed himself as the cruelest bastard to grace the shores of the earth when he killed his Father, Lord Roose Bolton and fed his wife, Lady Walda and the new-born legitimate Bolton to the dogs. Ramsay was afraid the new-born will grow up one day and lay claim to his temporary position as the King of the North but he has only succeeded in making himself vulnerable. His Father always protected him but he just made himself the number one muderable person in the North.

In King’s Landing, King Tommen is not happy that he cannot protect his mother and wife from the High Sparrow’s punishment so Jamie told him to go see his mother. He explains to Cersie he’s sorry and that he isn’t strong enough and pleads for Cersie to help him.

Tommen is the last Baratheon left. If he dies, who becomes the King? Game of Thrones can only get better.