Skip to content
You are at:Home»Reviews»Recap: Game of Thrones Season 6 Episode 6, “Blood of My Blood” 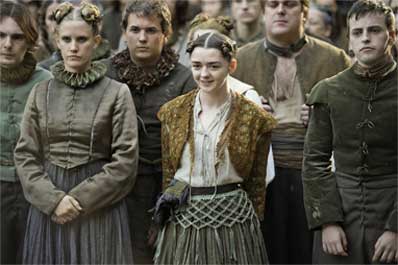 After last week’s emotional episode with so many actions where Hodor lost his life it was normal for the show runners to calm things down a little in this episode, Benjen Stark made a surprising return and we get to see Sam and Gilly again.

Jon Snow’s fat buddy, Samwell Tarly and his new found wife, Gilly continued their journey and finally got to Horn Hill, the Tarly’s family home not before Sam warned Gilly not to disclose her wildling heritage to his family (in truth everyone hates the wildlings). At Horn Hill Sam and Gilly with Craster’s son (whom Sam now claims) were welcomed with open arms by his mother and little sister who were happy to see Sam back with a wife and son. It’s been long anyone in the whole of the Seven Kingdoms received the hospitality Gilly received from Sam’s mother and sister.

At night, it was time for family dinner so Sam’s father and brother were back from their hunting to eat with the family. Sam being a fat dude wanted more bread to the disgust of his stern-looking father, Randyll who lambasted him for getting fatter and killing rabbits instead of becoming a man at the Castle Black. Gilly felt it was time to defend her sweet Sam boasting he killed a White Walker only for her to let slip she was a wildling to the disgust of Randyll. Sam was banished from Horn Hill and was told he will never wield Heartsbane, a Valaryian steel which has been the family’s heritage for 500 years.

Sam had other plans, at night he took the sword and fled with Gilly and the baby.

We now know Bran and Meera survived the swarm of walkers who killed Hodor but not totally. They almost got killed when Bran stark went in his vision again (we might finally be seeing the Mad King) and was touched by the Night’s King only to be saved by his dearest uncle, uncle Benjen. It was soothing to know there’s still another powerful Stark out there.

Last week Jaqen H’ghar sent Arya to go kill an actress who was wanted dead by another jealous less-appealing actress. She couldn’t complete the task but was given another chance to do this episode. Arya poisoned her wine but came back to stop her from drinking before she almost did. Arya revealed to her the other lady wanted her dead. We know Arya did the right thing but she probably forgot ‘Valar Morghulis’, All Men Must Die. Eh! Arya faces another battle to escape from the faceless god and his crew.

Back in Westeros, Jamie Lannister was ready to chop off the High Sparrow’s head and I was happy to be honest, we all thought Margaery will do the walk of atonement but old Sparrow had other plans. Tommen is now convinced the Crown needs the Faith to be stronger and strips Jamie off his title.

We saw the return of Walder Frey, the heartless old king who murdered Robb Stark and family in conjunction with the Bolton’s. House of Tully has taken Riverrun but Frey summons Jamie to help in getting Riverrun back. Cersei convinces him it’s the right thing to do with a passionate skills.

Finally, Daenerys while still wondering in the desert with her Dothraki army emerged from nowhere riding her dragon and dishing out inspirational words to the excitement of her Khalassar telling them they will conquer the Seven Kingdoms together. Well, Dany did well in asking for Daario Naharis advice first, at least we know they are headed to Meereen for now.