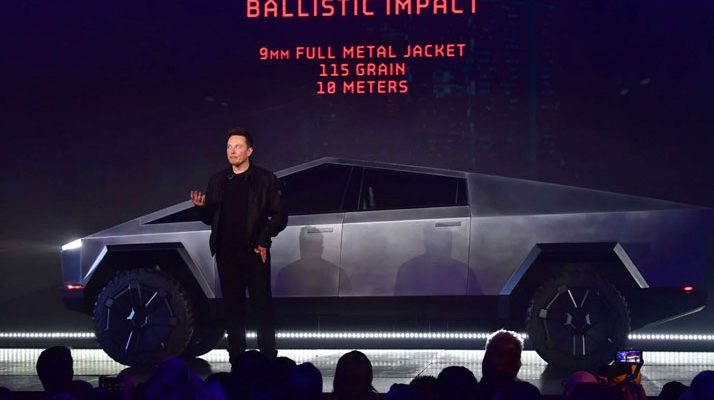 At an event in Los Angeles, Tesla CEO Elon Musk has announced the tech firm’s electric pickup truck – the Cybertruck. He also added that this vehicle would be sold as three models with 250, 300, and 500 miles while the basic variant will cost $39,900. Sales of this truck will begin in 2021; however, the company takes preorders.

In a bid to show its strength and bulletproof feature, Musk made his Chief of Design, Franz von Holzhausen, to hit the vehicle with a sledgehammer. Furthermore, he revealed that the Cybertruck could win a drag race with a Porsche 911. It also beat a Ford F150 in a tug of war match.

But things went differently, especially when he wanted to test the strength of the bulletproof glass. After a metal ball was thrown at it (by the Chief of Design), the glass shattered on both windows. At this point, Musk muttered, “We will fix it in post.”

Tesla will offer the Cybertruck in three models, and they include:

All models have a seating capacity of six adults. They also have a body of sturdy 30x cold-rolled stainless steel, which took a blow from a sledgehammer.

Other features on the Cybertruck include a 3,500 payload capacity and a storage space of 100 cubic feet. It also sports a 6.5-foot vault while promising a 4-inch suspension in every direction. Although details of its interior are sketchy, it’s possible to pick out a 17-inch touchscreen on the dashboard.

For many years, Musk has toyed with the idea of creating a Tesla pickup truck. In 2012, he tweeted that he “[w]ould love to make a Tesla super-truck” with “crazy torque” and “dynamic air suspension.”  In the following year, he revealed to the Business Insider that the tech firm had plans to build one. In 2016, the vehicle was mentioned in his second Tesla “masterplan.”

The Tesla CEO still considered the idea which he showed in an April 2017 remark. Then he mentioned that a reveal event would occur in “18 to 24 months.”  2018 saw Musk claiming that the vehicle offered a “futuristic-like cyberpunk, Blade Runner” look. He also added that he did intend to impress anyone with the product. He even pointed out that the Cybertruck project was his favourite Tesla plan.

Even if it stands as a pet project for Musk, the electric truck could benefit the company. After all, pickup sales have risen in the US while bringing favourable average selling prices and profit margins.

According to the VP of data and analytics consulting at JD Power, Tyson Jominy, “Pickup truck buyers spend a lot on their trucks.” He also mentioned that “A $50,000 pickup truck is a very common occurrence now. People are willing to spend on this segment to haul their toys to support a lifestyle.”

This comes as a piece of good news for Tesla, especially as it announced a $143 million profit in the last quarter. However, this feat was achieved after the company added $164 worth of credit and preorders for its still awaited “full self-driving” Autopilot.

However, a lot of activities will occur until the truck is available for sale. For instance, Tesla will commence the production of the Model 3s in China, thereby making it easier to sell vehicles there. It even plans to release a Model Y crossover next year.

In recent times, the SUV segment has challenged the growth of pickup trucks. But if Tesla’s plan pulls through, the company should reap massive gains as soon as the Cybertruck begins shipping.

Telsa has played a significant role in developing electric vehicles with long ranges. Besides, there are no electric pickup trucks in the market.

But when the Cybertruck becomes available in 2020, it might compete against similar products from Ford, General Motors, and Rivian. In summary, Tesla might have the unfamiliar task of entering an established market.