Skip to content
You are at:Home»Mobile»Iconic Nokia 3310 Re-Launched by HMD Global – See Pictures and Specs 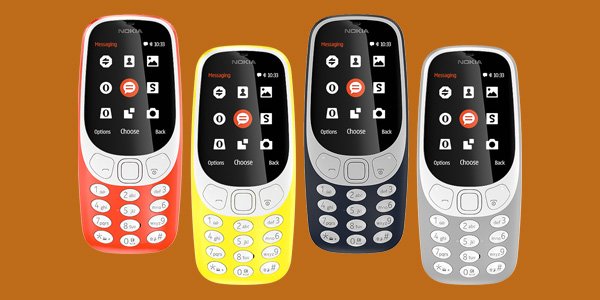 Nokia 3310 price and full specifications. The legendary Nokia 3310 was officially re-launched at the Mobile World Congress in Barcelona, Spain yesterday. The iconic phone which was first released in the year 2000 made its return yesterday.

HMD Global CEO, Arto Nummela, said before the press conference ended in Barcelona, ‘and one more thing — I almost forgot’ to announce the return of the legendary Nokia 3310.

The new Nokia 3310 comes in four colours – black, red, yellow and grey with a more even longer battery life than when it was first released. The phone has a one-month standby time and a talk time of 22hours. It comes with a 2MP camera and 16MB of memory, an upgrade on the first released one in 2000.

What’s In the Box?

Features of the New Nokia 3310