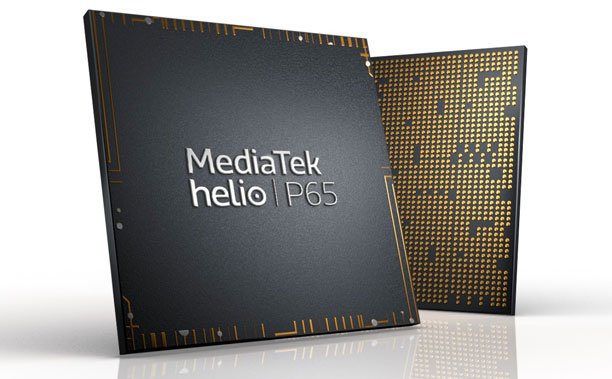 Tech giant, MediaTek has finally revealed a new chipset to the tech community. This mobile processor offers speedy CPU cores with a sturdy neural processing unit. However, it does not present itself as an upgrade to older models such as the Helio P70 (which has similar features) or the P60.

The Helio P65 CPU offers dual Cortex A-75 and six Cortex-A55 cores. But if you look at the Helio P60/P70, you will find four A73 and four A53 older generation cores in different proportions.

Instead of the highly efficient G72 cores used in the P60/70, the P65 uses ARM Mali-G52 cores. As it’s from the same Bifrost architecture, we should experience a drop in 3D performance levels.

Regarding its NPU, MediaTek claims it offers speeds double that of the mainstream Helio chipset thereby standing as a better option than the Helio P60/P70. It even provides 30% more speeds than the “direct competitor” chipset.

The P65 also brings enhancements to camera related hardware on supporting devices. For instance, it offers support for 48MP Quad Bayer sensors and Multi- Frame noise reduction. Furthermore, devices with this chipset will be able to take bokeh shots with one or two cameras.

With this mobile processor, videos will be encoded in H.265 format while featuring Electronic Image Stabilization and Rolling Shutter compensation (RSC). Although the chipset provides1080p/60 videos, it does not offer 4K. It also allows its users to unlock their phones with face unlock via a secure ISP.

Connectivity options on the Helio P65 include dual 4G VoLTE, Bluetooth v5.0 (up from v4.2) and Wi-Fi 5. With its latest GNSS engine, you enjoy enhanced indoor navigation features.

However, the P65 cannot be connected to UFS storage (as the P60/P70). Instead, it works with eMMC 5.1. Furthermore, dual channel LPDDR4x RAM are not available on the P60. With this in mind, we would like to see what the drop in overall performance will be when placed alongside today’s midrange Helio chips.

It’s expected that mid-range phones will be the target of the MediaTek Helio P65. This is because the Helio P90 focuses on flagship devices.

There are no details concerning the manufacturing process of the P65 chipset, but since models such as the P60, P70, and P90 are created on TSMC’s 12nm Fin FET node, chances are high the P65 will follow suit.