Skip to content
You are at:Home»Gadgets»Comparing Bluetooth Mouse vs Wired Mouse: Which Should You Go For? 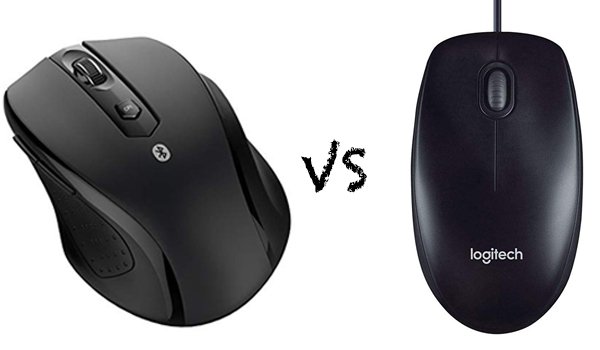 Mice are vital parts of computer hardware. For one, they are input devices we use to control objects on the screen. Thanks to the advancement in technology, one can purchase a wireless mouse (Bluetooth) or a wired mouse in stores. But comparing both the Bluetooth mouse vs wired mouse, which should you go for?

Although, both devices perform the same functions, there is an argument about which mouse stands as the best option for your PC

Now let’s look at the specs of both devices and see which model is best. Let’s begin with wired mice.

Before we give a final verdict on Bluetooth mouse vs wired mouse, let’s take a look at the wired mouse individually first.

Under this category, wired USB variants have an advantage. When connected to a PC, the mouse displays greater pointer and control/malfunction speed. It also has increased mouse acceleration. Even if the latest wireless mice have made attempts to upgrade similar features, wired mice still have the upper hand.

Except you want to purchase a flagship model, wired USB mice cost less than a wireless USB mouse. Also, you save money as wired mice do not need chargers or new batteries.

Overall, investing on a good wired mouse is better than owning a Bluetooth mouse which has several additional costs such as batteries. However, some companies are launching wireless mice that cost around the same amount as the wired models. They also come with rechargeable batteries to reduce the cost of periodic purchase of new cells.

Wired Mice do not Interfere with Your WiFi

Usually, Bluetooth devices transmit signals over a 2.4GHz frequency. This becomes a problem especially when other products work with the same frequency. This because both features can cross each other and disturb their functions in the process.

On the other hand, wired mice do not use such frequencies. This means your WiFi is safe when you work with a wired USB mouse.

Better precision and response for gaming and graphic design

As mentioned earlier, tech companies are launching Bluetooth mice that offer an impressive level of precision. However as wired variants exhibit minor input lag, graphic designers and gamers prefer working with them. This comes as no surprise as both professions require devices that support fast performance.

Wired mice Do not Use Dongles

Some Bluetooth mice connect with your PC via dongles. However, these tiny accessories can be misplaced easily. This means you can’t perform any task on your computer unless you find the missing item or buy a new one.

Wired mice work with cables which are permanently attached to them. Hence, you don’t have to worry about wasting hours looking for a way to connect your mouse to the computer.

Wired Mice Do Not Need a Power Source

Unlike Bluetooth devices, wired USB mice do not need a power source. Instead, they work with power from the desktop or laptop. This comes as an advantage as you can work for unlimited hours without worrying about low batteries. Also, if a wired mouse has fewer features, it consumes lesser energy.

With Bluetooth mice, you can work a PC in many ways. For instance, you can use the mouse while lying or sitting down. Also, you don’t have to worry about clutter around your desk because of the absence of wires.

Frees your USB Port for other Accessories

Wired models work with the USB ports. However, you might need to use these ports for other reasons especially when newer laptops offer less of these features. Under such circumstances, a Bluetooth mouse serves as an ideal alternative as it does not need to connect with any of the ports.

Bluetooth Mouse vs Wired Mouse – Which One Should I Purchase?

Selecting a mouse depends mainly on your taste. Most times it depends on your task at hand. But if you ask me, I would prefer the wired model as they do not require batteries. Also, they display great precision, especially when playing video games.
But whatever model you choose is fine as they both get the job done. So, what model would you prefer? What are your reasons? Please, we would like to hear your comments in the box below.