Skip to content
You are at:Home»Apps & Downloads»Top 10 Best Offline RPG Games for Android 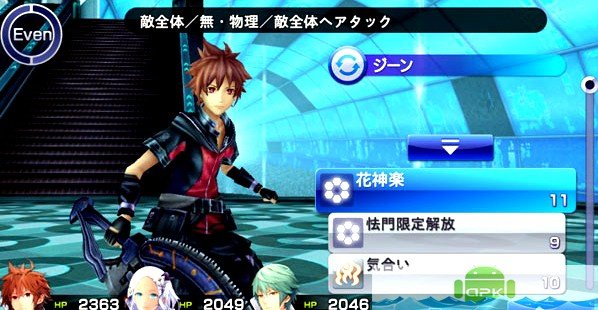 If you’ve been looking for the best offline RPG games for Android for your phone or tablet then you are in the right place. RPG games are fun with players playing the role of a fictional character. Of course, there are so many good games online to download but there are not too many that can be played offline.

In no particular order, below is the list of the best offline RPG games for Android you can download on your phone or tablet device.

There can be no mention of the best offline RPG games for Android right now without talking about Chaos Rings 3. CHAOS RINGS is a full-scale RPG series for smartphone devices that was first introduced worldwide in 2010. As part of a continuing series, CHAOS RINGS OMEGA was launched in 2011, followed by CHAOS RINGS II in 2012. The rich game world, deep storyline, and high-quality soundtrack have been praised throughout the world, recording over 1.1 million downloads across the series. To this day, CHAOS RINGS firmly maintains its position as the best RPG series available for smartphones!

Chaos Rings III can be purchased and downloaded from Play Store here.

The year is 2054. Magic has returned to the world, awakening powerful creatures of myth and legend. Technology merges with flesh and consciousness. Elves, trolls, orks and dwarves walk among us, while ruthless corporations bleed the world dry. You are a shadowrunner – a mercenary living on the fringes of society, in the shadows of massive corporate arcologies, surviving day-by-day on skill and instinct alone. When the powerful or the desperate need a job done, you get it done… by any means necessary.

Shadowrun was awarded the best Android game of 2013. It works on both mobile and tablet devices.

Shadowrun Returns can be purchased and downloaded from Play Store here.

Become Flux Dabes, a galactic trucker whose latest shipment gets derailed by a chin-strapped alien menace named Hewgodooko, leaving you stranded on an alien planet. As you hustle to retrieve your packages you’ll become enmeshed in a nefarious plot of world domination, which will require all of your wits and both of your glutes to overcome. Learn recipes from the local sentient life, make new friends, uncover ancient secrets and deadly bosses, tame everything and build yourself a home-away-from-home as you learn to thrive on planet Woanope.

Crashlands can be purchased and downloaded from Play Store here.

In the northernmost reaches of the Forgotten Realms lies the region of icy tundra known as Icewind Dale. Journey deep into the Spine of the World mountains, a harsh and unforgiving territory settled by only the hardiest folk. Encounter fearsome beasts that have learned the cunning and ferocity needed to survive among the snow-shrouded peaks. Confront an evil that schemes beneath the carven glaciers and mountainsides to wreak destruction upon the face of Faerûn. This is the world of Icewind Dale: Enhanced Edition.

Stride along with Kiyan, the Shadow Tribe’s virtuoso, and Eara, the influential Channel of Light, in their fantasy adventure story.
With improved graphics and storyline from the previous series, get indulged in the battles against goblins, orcs, and more!

Inotia 4 can be downloaded for free from Play Store here.

Twenty years after the fall of Earth, the remnants of the Human race are once again faced with extinction. The time has come to justify our existence. A mysterious life form known as the XADA squares off against humanity’s last weapon – the War-Mech series III battle suit.

Implosion is free on Play Store and can be downloaded here.

Mage Gauntlet is a classic-style action-RPG, designed from the ground up for mobile. It’s inspired primarily by 90’s action RPGs for the Super Nintendo, such as Legend of Zelda: LTTP and Secret of Mana. We wanted to make a fast-paced RPG that doesn’t waste your time with fetch quests.

Mage Gauntlet can be purchased from Play Store here.

The spirit of Battleheart returns, re-imagined! In Battleheart Legacy, you will explore a rich and detailed fantasy world, customize your unique hero with dozens of powerful skills and items, do battle with hordes of enemies, encounter quirky characters and discover the stories of a troubled realm. Will you become a powerful wizard or a notorious rogue? A noble knight, or a savage barbarian? How will you forge your legacy?

Since its release in 1998, this classic saga of mystery, intrigue, and adventure has set the standard for Dungeons & Dragons™ computer roleplaying games. Customize your hero’s traits and abilities, recruit a party of brave allies, and explore the far corners of the Sword Coast in your search for adventure, profit… and the truth.

Baldur’s Gate can be downloaded from Play Store here.

There you have it! These are the best offline RPG games for Android you can play in 2019.