Skip to content
You are at:Home»Social Media»Instagram will Now Let You Delete an Image or Video from a Carousel 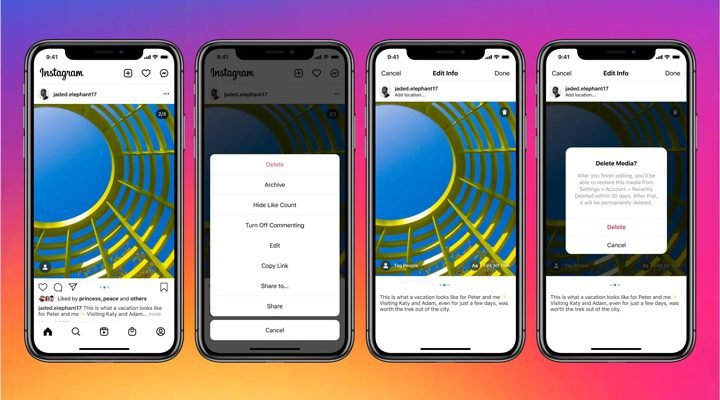 When Instagram introduced the carousel feature in 2017, it was a welcome development. People were able to share up to 10 photos and videos in a single Instagram post but the feature wasn’t perfect because users could not go back to delete a single image after a carousel has been posted. In an update on Twitter on Wednesday, the social media platform will now let users delete a single image or more in carousels.

Instagram head Adam Mosseri detailed the new feature in a demo video on Twitter. To delete an image or video from a carousel, go to the post and click on the three dots at the top-right corner, hit “Edit” and swipe on the photo you want to remove, a new delete icon appears on the top-left and you can tap on it to get rid of the video. The feature is rolling out on iOS now with Android to come soon.

Another feature shown by Mosseri is “Rage Shake”. Rage Shake lets you report a problem or bug on Instagram by literally shaking the phone to bring out the “Report a Problem” box. Mosseri says someone will actually take a look at the problem and this will help Instagram to “prioritize bugs and other things to fix in the app.” Rage Shake is only available in the US for now on iOS and Android.

The new features are a welcome development and should definitely improve the user experience on the social media app.

Instagram Will Begin Testing Ultra-Tall Photos to Match with Reels