Skip to content
You are at:Home»Apps & Downloads»Top 10 Best Offline Shooting Games for Android 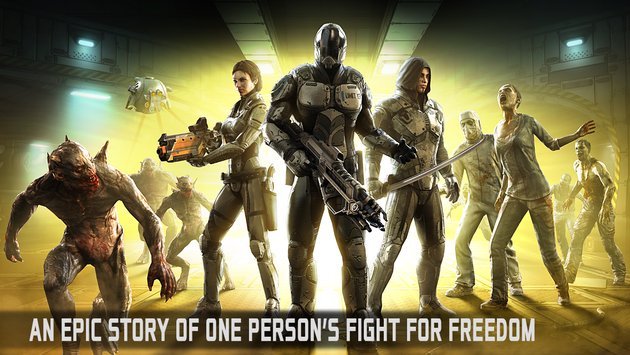 If you’ve been looking for the best offline shooting games for Android for your phone or tablet then you are in the right place. Shooting or Action games require a high level of thinking and stimulate mental awareness as well. Of course, there are so many good games online to download but there are not too many that can be played offline.

In no particular order, below are the list of the best offline shooting games for Android you can on your phone or tablet device.

If you are looking for one of the best gaming FPS action on Android, look no further than Dead Effect 2. Dead Effect 2 is the next iteration and successor to Dead Effect which was first released. Dead Effect is a sci-fi shooter game which is completely free to download on play store. The game features the latest Android/NVIDIA graphics, immersive gameplay with customizable controls and over 20 hours of campaign gameplay plus more than 10 hours of special missions.

Dead Effect 2 is free on Play Store and can be downloaded here.

As the name reads, Into the Dead throws you into a zombie world where you are expected to survive fighting the dead. Do what you have to in order to stay alive, keep moving as fast as you can, and protect yourself by any means necessary. When the Dead are rising, run! The game features gruesome and intense gameplay with stunning graphics and it is supported on tablet devices.

If you are a fan of the legendary Hitman gaming series on Console or PC you definitely know what to expect on the mobile version. The Sniper version of Hitman is basically a shooting game with the most compelling sniper experience. Staged in Montenegro, the game has over 150 missions to complete and 10 different contracts to negotiate.

Hitman Sniper can be purchased and downloaded from Play Store here.

Kill Shot Bravo is arguably the number 1 FPS action game on Android devices. You are represented as a trained armed forces soldier with over 500 scintillating missions to navigate. Arm yourself with deadly assassin sniper weapons, assault rifles, machine guns and the latest military gear to complete covert combat missions deep inside enemy territory! Kill Shot Bravo is free and does not require the internet

Kill Shot Bravo can be downloaded for free from Play Store here.

There can be no talk best offline shooting games for android right now without mentioning Critical Ops. With neat graphics and captivating gameplay, Critical Ops is a fast-paced FPS that will test your reflexes and tactical skill. Experience the thrill of modern terrorist warfare as you fight a critical strike operation as a counter-terrorist or aim to cause destruction as a terrorist. Fight for domination alongside your friends, or show the world your skill by leading the individual scoreboard. Join the competitive combat in the most skill-based portable FPS! The game is currently in a development phase but you can still download and play.

Critical Ops can be downloaded for free from Play Store here.

Unkilled can be downloaded for free from Play Store here.

For its 20MB size, NOVA legacy offers much more than just an average game with a little file size. NOVA Legacy is a sci-fi FPS game with decent graphics, immersive shooter experience and an online multiplayer feature. There are 3 game modes: Story Mode, Shadow Events and Special Ops.

NOVA Legacy can be downloaded from Play Store here.

Deus Ex is a story driven-action RPG FPS shooter game that works on android phones and tablet devices. The Fall is the start of a new journey in the award-winning Deus Ex game series for Android phones and tablets. Set in 2027– the golden era for science, technology and human augmentation. Ben Saxon an augmented former British SAS Mercenary, is desperate for the truth behind a global conspiracy threatening his life.

Deus Ex can be purchased and downloaded from Play Store here.

Call of Duty®: Strike Team delivers an all-new, first-person and third-person Call of Duty® experience built from the ground up for mobile and tablet devices. Fully customize your squad’s loadouts and abilities before leading them into combat in diverse gameplay environments. Call of Duty®: Strike Team features the revolutionary ability to dynamically switch from run-and-gun first-person view to reconnaissance and coordinated squad attacks in third-person view.

The game has two modes for you to navigate through – the campaign mode and survival mode. The only downside about the game is that it requires Android 6.0 and upwards.

Call of Duty can be purchased can be downloaded from Play Store here.

Join the Squad! In this official Suicide Squad film game, you have been selected to lead a special task force comprised of highly dangerous incarcerated Super Villains. It is up to you and your Squad of antiheroes to defeat the horde of enemies that try to stop you. Fight as Harley Quinn with her signature baseball bat, or as Deadshot with his rifle or as Diablo with fire. Can you complete the mission? Are you Squad enough?

Suicide Squad can be downloaded for free from Play Store here.

There you have it! These are the best offline shooting games for Android you can play right now.