Skip to content
You are at:Home»Mobile»Smartphone Batteries To Be Reinvented Using Lithium Metal 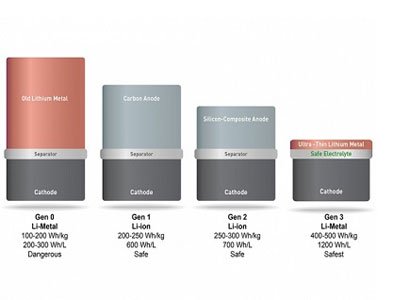 From the battery of cars to smartphones, lithium ion has always been the chief component in batteries and in recent time, technological advancement has improved its capacity; we now have batteries that come with 30000mAh but the fact remains that consumers want more from batteries.

In this regard, an MIT (Massachusetts Institute of Technology) graduate has designed a new model of rechargeable battery. It is called the lithium metal battery.

This new battery technology is designed to be small in size but double in energy storing capacity. A prototype released in 2015 is half the size of iPhone 6 battery, but packed with monster amp hours.

According to the manufacturer, both the old and new batteries are manufactured from the same materials but the technique of production differs. The technique used in production of lithium metal made it non-flammable and has the ability to operate in wide range of temperature.

Lithium Metal Battery is expected to go into commercials in November, and it will first power drones before powering other gadgets like electric cars, computers, cameras, smartphones etc.