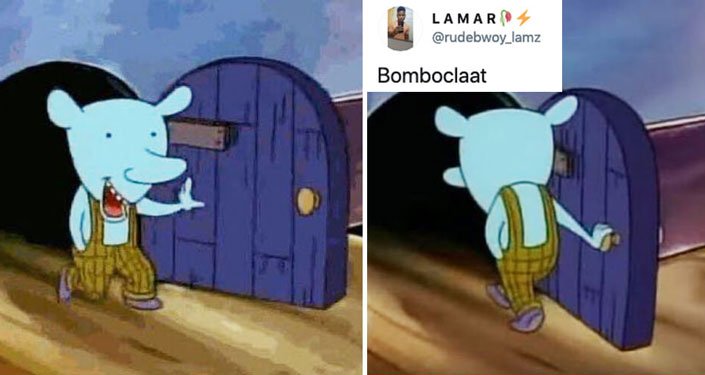 If you want all the drama, new trends or the latest updates on whatever is happening in the world and especially Nigeria, Twitter is the pace for you. If you are familiar with Twitter, you must have seen the phrase “Bomboclaat”.

Since Bomboclaat was first tweeted by a Jamaican back in September 2019, it has refused to go away.

Before Bomboclaat, there was the popular phrase O jewa keng. O jewa keng was started by a young female South African @akreana_ and it became a popular trend on African Twitter. Translated to English, it means “what’s eating you up”? The phrase became an avenue for Twitter users to pour out their minds. It became emotional and people used the phrase to get heavy things off their chest. It trended for months before it finally faded out, but it left a mark on African Twitter.

Since Bomboclaat was first tweeted by a Jamaican @rudebwoy_lamz last year, it was refused to go away. It has outlived all other catchphrases.

What is the Meaning of Bomboclaat?

Bomboclaat is not what it means on social media today. It is a Jamaican curse word, let’s say it is the Jamaican equivalent of “Fuck!”. It is used in Jamaica when someone is angry or surprised. It originated from Jamaican Patois language.

How it is Used on Social Media Today

Today is used often on Twitter to sort of ask people’s opinion with whatever image it is tweeted with. It could also be a funny image which people have to quote with whatever they think it represents. These are some examples below:

For now, Bomboclaat is not going away any time soon. Till a new trend comes out, we should all embrace it and enjoy the ride.