Skip to content
You are at:Home»Apps & Downloads»Top 10 Best Video Player Apps for Android 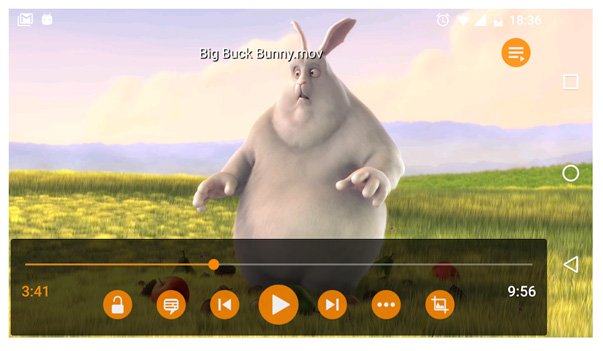 Looking for the best video player apps for Android? This article provides just that. Gone are the days when our phones were only for calls, texts, and internet browsing. Today, the size of smartphone screens and their High Definition images make them perfect entertainment devices. This means users can now download or transfer HD movies and TV shows to your phones and watch on the go.

Now, because of Android’s open architecture, the Android OS is populated with a variety of top of the line video apps, allowing you to get the features you desire. From the lightweight, easy to use players to highly configurable powerhouses, Android is not in lack of great video players to replace the stock video player.

Related: How to Cancel Google Play Auto-Renew Subscription for an App

We compiled a list of the best video player apps for Android. Check them out.

Best Video Player Apps for Android You Should Try Out

Undoubtedly the best video player in the Android ecosystem and that is backed up with its popularity. It has over 500 million downloads and a rating of 4.4. MX Player offers a perfect mix of simple user experience and powerful features. An uncluttered viewer supports various swipe gestures and pinch to zoom, while the app features both software and hardware decoding for a broad variety of file formats. Subtitle controls, variable aspect ratio, and a screen lock are all within reach of the main screen, while other tweaks are hidden in the settings menu. Another feature that people don’t talk about often when talking about MX Player, its ability to fetch subtitles within the app. It has a free version containing adds and a Pro version which does not.

Born from the robust PC video player, VLC for Android is a free, open-source powerful video and audio player with a complete database and an ability to play a variety of audio and video formats. VLC is a free cross-platform player that plays across different devices.

If you get VLC, be assured you won’t have to deal with ads and no in-app purchases. It has been downloaded over 100 million times and it is rated 4.4. Certainly one of the best video player apps for Android.

Video Player All Format is another strong video player on the Android platform. It is rated 4.8 on the app store and was Google Play Best of 2017 winner. With support for most and all popular video formats and support for 4k files, XPlayer, as it is otherwise known, is definitely worth a download. Among its many features include an inbuilt subtitle downloader and night mode for those late-night binge sessions.

Once considered the best video player on iOS, PlayerXtreme made the jump to Android sometime back and from all indications, jumped with their iOS qualities intact. It’s got all the qualities we’ve come to expect from our video players – an ability to play multiple formats etc. In addition to the basics, its got 4K Ultra HD file support. And perhaps more remarkably, with this app, you can stream your files from multiple devices. It is rated 4.4 with over 100, 000 installs. Certainly one of the best video player apps for Android.

We can get technical and tell you about the multi-core HW decoding support that BS player has or tell you about its hardware accelerated video playback or we can just tell you BS player is rated 4.3 from over 100,000 users and has been downloaded over 10m times. It can do anything your average video player can do and it goes further with the ability to connect to your network shared folders and play remote files.

KMPlayer is another good Android player that supports a variety of video file formats. What sets KM player apart is its stylish design. It, along with its peers can play 4k Ultra HD files. It also supports network play and you don’t have to worry about ads. It is also robust enough to play online video files such as Youtube videos by simply entering the URL of the file.

Video Player HD is a solid Android video player that comes with support for 4K video playback. It can play multiple video formats including AVI and FLV. It also doubles as a music player making it two in one application like VLC. It also has video streaming support. It has been downloaded over 10 million times and is currently rated 4.5 on the play store, this apps makes our list of the best video player apps for Android.

Mobile QQ player is one of the best video player application running on Android smartphones that supports all the popular video formats. While most robust players stop at 4k files, QQ player has 3D video file support. Its smart core technology allows it to detect video formats and adjusts its codec automatically, making it easier for you to enjoy better and smoother quality videos.

Themes, multiple windows, and a simple user interface. gPlayer tries to make video players fun and it mostly succeeds. It supports almost all media file type and a wide range of subtitle files. It also allows streaming of online video files through URL. Furthermore, it supports group media sharing, allowing its users to share their media files across a wireless channel. It is currently rated 4.3 on the Play store.

The lowest rated player on this list but perhaps the visually smoothest of them all. The Archos Video Player might have a lowly 4.0 rating on the play store, but it offers a lot compared to its counterparts in the aesthetic department. Its unique ability compared to the players on this list to automatically fetch descriptions for media files gives you an all-around video experience on your handheld player. It ticks all the standard boxes of your modern player and it is certainly one of the best around. Unfortunately, to unlock all the features of this good app, you might have to pay a little fee, but we promise it is worth the outlay.

if you also mac user, we recommend you to try Elmedia player, this is one of the best video players, it easily reproduces all popular media formats, such as SWF,MP4, MP3, AVI, FLV, MOV, DAT, FLAC, MKV, MPG and others